When I was a kid, I spent a lot of time in the library. It was in an old house on Main

Street in Belmont, right near our house. I read pretty much every book that was in there. Then they closed it. A bookmobile came to town instead.

The bookmobile was part of the Elgin County Public Library system. I liked it too – wasn’t as good as being able to go to the library any day you felt like it, but it was kind of exciting, knowing the bookmobile was coming the next day.

Several years later, after I’d left Belmont, they built a nice new library there. There are professional librarians staffing it, and all the paper and online resources you need. It’s a

lovely library. We can see the people going in and out from my parents’ house. It’s well used, as a library and a community centre for meetings, special events and family get-togethers in the hall you can rent. My mother took my dad’s stuff over every November for the Remembrance Day display. A lot of people from the whole area came to see it. My parents had their 50th anniversary party in the hall.

I was talking with my brother a few years ago about reading. I’ve read my whole life but he didn’t, to my knowledge. But he was telling me about books he’d been reading. I said something about going to the library and he said he just buys the books he wants, new or used. He said he’d stopped going to the library when they closed the old Belmont library down. He’s older than me by several years so we didn’t share a childhood. I had no idea

he’d ever been in the library in Belmont.

He said he’d read every book in there at least twice. But he stopped reading when the bookmobile took over. He didn’t want to have to be at a certain place at a certain time in order to get a book. He was a teenager, old enough to have a life, but not old enough to drive to another town’s library. So he got out of the habit of reading for pleasure.

When the bookmobile became our only library, I was young enough to not have anything else to do, and going to a place at a certain time was still a thrill for me. So I kept reading, although I missed the old building with its creaky floors and dark rooms with unexpected treasures found hiding on high-up shelves.

So now the village of Glanworth, just west of Belmont, is losing its local library. The London Library board says it can’t afford the expense of a separate library for so few people. The people of Glanworth want their library, as a place of books and resources and of community. I hope, one way or another, they can keep it.

You can have a community hall, sure. But there’s something about having it also house books and other worlds of knowledge that enriches the community as a whole and the kids and adults that comprise that community. 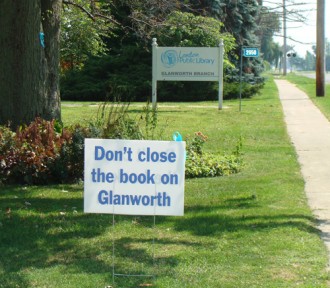 I’m glad nothing ever happened to cause me to lose my love of reading. And I’m glad my brother found his way back to reading for fun. I hate to think there will be kids in Glanworth now in the situation we were in all those years ago. They’ll either stop reading or have to go to much more trouble to get books than just walking down the street to their local public library. The town’s battle cry is, “Don’t close the book on Glanworth.” I hope you win.

We use cookies on our website to give you the most relevant experience by remembering your preferences and repeat visits. By clicking “Accept”, you consent to the use of ALL the cookies.
Do not sell my personal information.
Cookie SettingsAccept
Manage consent