Last month, the new prime time tv programmes were rolled out. Many are good. They threw my life into chaos because I actually wanted to watch them. 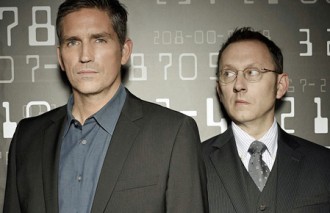 Prime Suspect I was doubtful of. British series are usually done best by the British, and I didn’t like the idea of the wonderful Helen Mirren series being replicated, or mutilated, by Hollywood. But it isn’t.  It stands on its own merits as does the star Maria Belo.

The ads for Pan Am were wonderful. Could the show live up to them? Yes. I’d feared a pale imitation of Mad Men, cashing in on the 1960s milieu evoked so wonderfully by it. (We’ve watched the first seasons of MM on Boxee.) Or superficial “coffee, tea or me?” T&A. But it’s a beautiful looking history and geography lesson with good stories and good acting.

I watched the premiere of The Playboy Club. Same ‘60s women-centred setting. Overtly T&A, fitting the subject matter. Hmm, wait and see was my opinion. No time – it was cancelled after three episodes! I was sorry because I have a soft spot for Eddie Cibrian who was the male star.

I interviewed him when he was bad boy Matt Clark on Y&R and liked him. I was delighted to see him in a big prime time series.

Our favourites are still on and still good. House has had big changes and it’s still great. The CSI, Criminal Minds and Law & Order franchises (including L&A UK), Harry’s Law and the excellent

Canadian Flashpoint. And now, new shows! It’s been quite a change in our household.  We’d become accustomed to having the tv on the least annoying programme while we worked on computers. That was ok, except when you really wanted to watch something good and all that was on your 500 channel galaxy was America’s Got Talent and its clones.

I was ready to cancel cable – it was very expensive white noise. I took these pictures 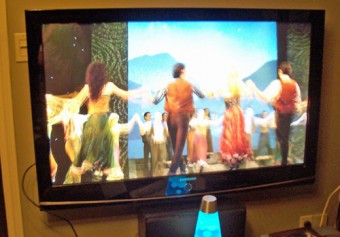 one evening last year when I’d really wanted to watch tv. The best thing I could find was Riverdance in Beijing on PBS. While good, it wasn’t what I wanted, so I just went to bed with a book. $100 a month for Rogers Cable basic HD package, and my entertainment was a novel borrowed, for free, from the library.

But I can ask why they organize their channel packaging the way they do. You know there are shows you want to watch, but you have to pay extra for their channels. You get, ‘free’, a lot of channels that just slow down your guide scrolling. The Fireplace Channel. Rogers-owned sports teams channels. Shouldn’t they be specialty channels paid for by thems that want them?

Recently, my stepson hooked up a wire to our tv, without cable. We got in six channels clearly. Only CBC, our national broadcaster, was snowy. If I knew the networks would keep the quality and type of programming they introduced this fall, I’d cancel cable and rely on what we can get over the air. But I can’t be sure, so Rogers dodged a bullet.