My husband does not like Todd, at least not the manipulative and nasty Todd who 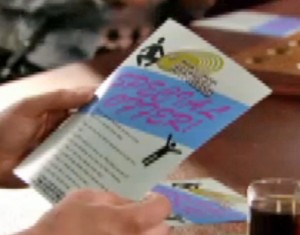 returned from London. But he grudgingly had to agree with Todd’s critique of the flyer Alya made to advertise the gym.

Too wordy and the wrong font, Todd told Alya. Jim hadn’t paid attention to what Todd was actually saying. He often ignores Todd’s words. I replayed it, saying listen carefully and look at the flyer.

Working in graphic arts, Jim often has advised clients against cramming too many words 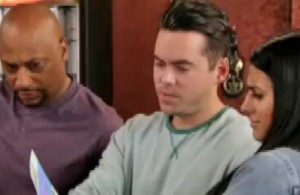 in a small space. It looks cluttered and people just don’t read it. He agreed with Todd that “small print is overrated”. Of course, we can also read into Todd’s words a commentary on himself. Perhaps Marcus should heed the ‘fine print’ warnings that Todd carries. But his words to Alya are wise in terms of design if you want to “grab the punters”.

Jim’s advice to Alya was, if all the information is actually needed, put it on the back. Keep the front clean and simple so it catches the eye. In addition to the wrong font choice, Jim added that the blue and pink were the wrong colour choice alongside the others used. 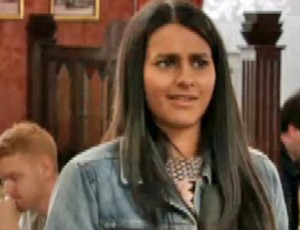 Don’t crowd too much detail in, choose the right font in a big enough size to read easily and a pleasing colour scheme. Good tips if you’re designing flyers or pamphlets for a business or signs for your yard sale. Alya didn’t thank Todd for his help, but she should have.