Is there a human disorder that mimics the mating behaviour of the praying mantis? If so,

maybe Anna Windass has it. Every time a child comes into her life, her mate must go. First Eddie Windass when Faye arrived, now Owen when Faye’s baby is hardly home from the hospital.

I know these situations resulted from the actors’ decisions to leave the show, but poor Debbie Rush has reason to be developing a complex over her character driving away her men and then huddling protectively over her brood.

It started Monday, when Anna had a fit about Owen encouraging Faye to say what she really wants about the baby. Anna will not allow Faye to even entertain the “wrong” decision, giving the baby up for adoption. At least she finally admitted that to Owen; that, in her mind, there is only one “right decision.”

Then, within the same argument, she told Owen that was it, she wanted him to leave, that

He stayed at Kevin’s, then hung around hoping to change Anna’s mind. Izzy advised him to go to Portugal for a visit and let Anna think, maybe even miss him. He decided to do that. Then, after Anna firmly told him again that there was no chance for them, he decided to accept a job in Aberdeen.

Then, somehow, the whole separation became his fault. When Faye was upset that Owen and Anna might split up, Anna told him that he had to tell her that they were separating and he was leaving. He had to do the breaking of Faye’s heart, as if it all were his idea.

Anna is exhausted from pretty much single-handedly looking after the baby, although everyone (except Faye) has offered to help. She 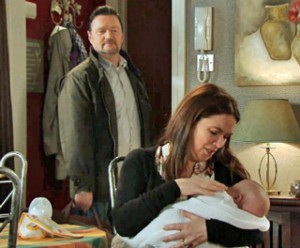 is worried about Faye. Anna has no money and now two children dependent on her. And she kicks out the man she says she loves and who doesn’t want to leave her.

The only difference between this story and that of Eddie’s departure is that Eddie did not want them to keep Faye. He put a ‘me or her’ choice to Anna, and Anna chose Faye. Other than that, it’s déjà vu all over again.