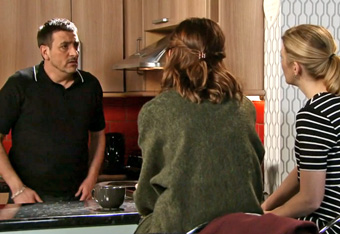 Nice little moments Monday of friends history. Leanne and Toyah badger Peter to speak to Steve on Leanne’s behalf, get him to back off on wanting to be part of the baby’s life.

Peter doesn’t want to be involved. Why would he listen to me, he asks. You’re his best friend, Leanne says. We’re friends, but best friends? So who is, Toyah asks. He runs through the list in his head: Ciaran, he’s my best friend. He was my pick too for Peter’s bestie,

But, regardless of where on the friendship scale Steve is, Peter talks to him at the Rovers. Steve sees the set-up, recognizes Leannne’s words. Asks how his friend could sell him out like this. A discussion of friends and who’d qualify as ‘best’, who’s just ‘mates’.

Liz comes over to them. Steve tells her in exasperation that his “best friend” is doing a number on him. “Oh, you’ve spoken to Lloyd!”, she

A way to make you smile, remembering characters and friendships. A small light-hearted joke stream before we hit heavy waters later in the week. New crises, new conflicts and new characters.

I kept thinking back to the friendship ranking. The only adult male I can think of on the Street with no real ‘mates’ to rank is Nick. Why is that not surprising?