Dear readers, I need your help. I am looking for the parents of Genevieve Jane Duffenais or Duffney. She married George Hynes. They lived in the Gravels on the Port au Port Peninsula. They had several children, among them Elvina Julia Hynes (1870-1907). Elvina married William Thomas Gillam in 1899. 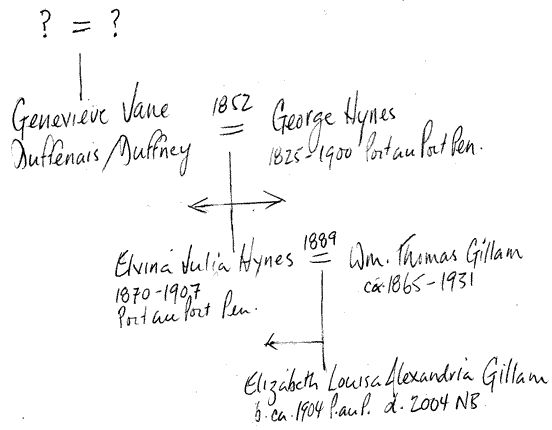 Some genealogies I’ve seen show them as having a daughter Genevieve, with no husband or children listed.

Some show Genevieve Jane Duffenais/Duffney as wife of George Hynes, but do not give her parents’ names.

Another tree (#87 – michaeldauphinee.ca is gone) has John Frederick married twice. With first wife, Mary Anne Young, he had 4 children. He and second wife Rebecca Elizabeth Morash had 8 children, including Jane Duffenais (1833-1909, married George Haynes) and Genevieve (b 1843). But I saw that second wife only in that tree and I haven’t been able to learn anything more about Rebecca Elizabeth Morash.

Jane was often used as a short form of Genevieve, but it’s also a name in its own right. So you might have a Jane and a Genevieve in the same family. But it’s not likely that you’d give the same name to two children who both were alive.

I found out that Elvina Hynes and Thomas Gillam had a daughter named Elizabeth Louisa Alexandria. She moved to New Brunswick and has descendants here. I thought it would be fun to trace the family back in Newfoundland. That was when I saw the problem with Genevieve. So if anyone can help, I thank you very much.