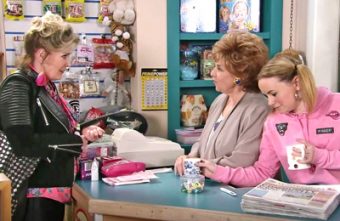 The chat in the Kabin on Wednesday about royal weddings and coronations. Liz and Rita remembering, Gemma trying desperately to remember her history lessons in school. Very funny.

Liz and Rita explained to Gemma that Coronation

Street was renamed in 1902 for the coronation of Edward VII. Rita told Gemma that television existed in 1953 so they could watch Queen Elizabeth II’s coronation. She heaved a sigh of exasperation at Gemma’s explanation for not knowing that because she didn’t know anything about “Victorian times”.

Rita and Liz reminisced about the other big Royal wedding they watched years back. That of Charles and Diana. Gemma was straining, trying to keep track of the who’s who. She and Rita both looked flummoxed when Liz proudly said she credited Diana’s example for developing her own fashion sense.

I had hoped they would not ignore the wedding of Harry and Meghan. They had done such a good job commemorating William 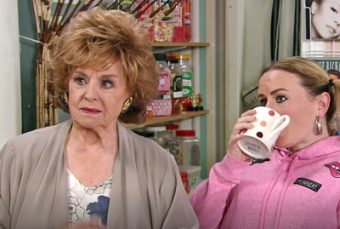 and Kate’s. It worked in nicely with other storylines at the time, about reasons for marriage. The nod to Harry and Meghan’s wedding was more a small interlude between ongoing stories.

And the good Lord knows we needed it! At least I did. All the pots were on full boil this week.

We’ve got the Connors still dealing with Aiden’s suicide. Early in the week, Johnny lashing out at Jenny then trying to make sense of what happened – perfect. Gut-wrenching and thought-provoking. And then it got crowded out by too much else.

This makes a three ring circus look like watching paint dry. And we haven’t even buried poor Aiden yet.

Friday, Alya to Zeedan: “It’s big, it’s gonna take time.” Words of wisdom for the writers here. Just throwing all the spaghetti at the wall at once doesn’t allow time to savour and digest each strand. 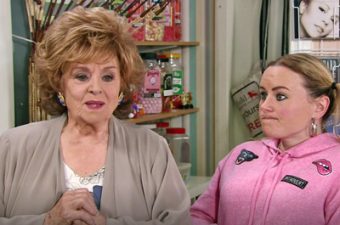 After watching it, I expected I’d choose Johnny’s outburst at Jenny as my scene. But at end of the week, all that still stood out for me was Liz, Rita and Gemma talking about royal weddings.