This story is about Terrenceville, Fortune Bay, about 140 years ago. It was told to the late Esther Mary Cox by her grandmother and namesake, Esther Mary (Myles) Mitchell. Mrs. Cox passed the story on to Calvin Hackett when he interviewed her many decades ago. Mr. Hackett and Sheila Parsons Cox told me the story, and it’s one of my favourites. I’ve changed nothing of what they told me, other than to add a bit of context.

Years ago in the summer, during much simpler times, the entire Conne River Mi’kmaq band would travel from Bay d’Espoir down Fortune Bay to stay in Terrenceville. From there, they travelled across the Burin Peninsula to hunt in areas such as Swift Current and Sandy Harbour. In Terrenceville they camped at a place called “River Garden”. It was at the end of the “The Meadow,” close to a barachois called Koskaecodde by the Mi’kmaq ancients.

Some of these Mi’kmaq visitors eventually stayed in Terrenceville. They intermarried with European families and have many descendants in the area today.

Esther Mary Myles was the daughter of a European settler family in Terrenceville. She was born about 1861 to Elizabeth and Robert Myles (or Miles). When a young girl, she played with the visiting Mi’kmaq children. They developed strong friendships despite cultural differences and being apart much of each year. The years passed and they became young women, but they all remained close friends.

One summer in the late 1870s or early 1880s, the Mi’kmaq camped as usual at the “River Garden”, at the home of a Mi’kmaq man named Joseph Saunders.

Esther overheard the adult white people say that they had planned to attack the Mi’kmaq at the encampment. They wanted to drive them out of the area. Realizing the seriousness of this, Esther didn’t search out her female friends. Instead she went directly to the camp of their chief. She entered his tent, sat down and explained what she had heard. The men from the area were going to “do up on them,” she told him. Esther pleaded for him and his tribe to take up their camps and leave.

See, at that time, the European settlers were upset that the Mi’kmaq would come every year and take away ‘their’ hunt. The Europeans considered the Mi’kmaq to be stealing from them. This, despite the fact the Mi’kmaq had been hunting in the area for much longer than any Europeans had lived there.

Esther pleaded that their leaving would eliminate the pending danger to all. The chief’s first response to Esther was silence. But then he withdrew his large hunting knife. Still silent, the chief began to cut off portions of every different kinds of fresh meat that he had. Next, he placed the meat into a bag and passed it over to her, in appreciation.

Early next morning, Esther’s first thought was to check the meadow from her house window. She was overwhelmed to see that there was not a sign of a tent left on the meadow. Her Indian friends had moved on before the first hint of daylight. Not long after, it was reported that the Mi’kmaq were seen paddling up the bay. 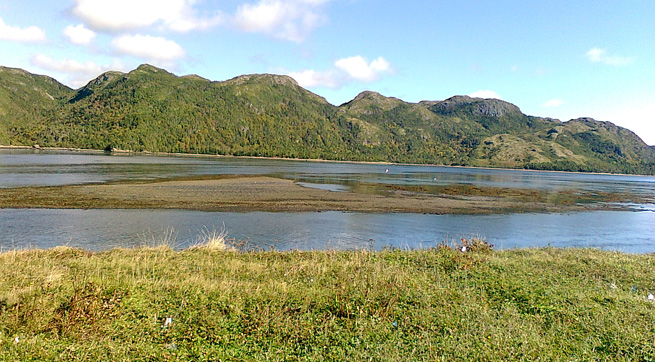 From that point on, they no longer visited the area. The ones who stayed had already intermarried with the Europeans, so today their descendants make up the new Mi’kmaq of the area. Those Europeans who had differences with the Mi’kmaq are long gone, and over 95% of Terrenceville now is of Mi’kmaq descent.

Mrs. Mitchell, her granddaughter Esther said, was very proud of this story. She always remembered with great affection her Mi’kmaq friends who departed all those years before.

Click or tap images in this post for a larger view (except the photo of Mrs. Mitchell, already at full size).