On the road to St. Martins in southern New Brunswick you see a sign in a clearing on a corner. Willow Grove Black Settlement Burial Ground, it says. Behind it is a large cross and a tiny church. You stop to take a look. 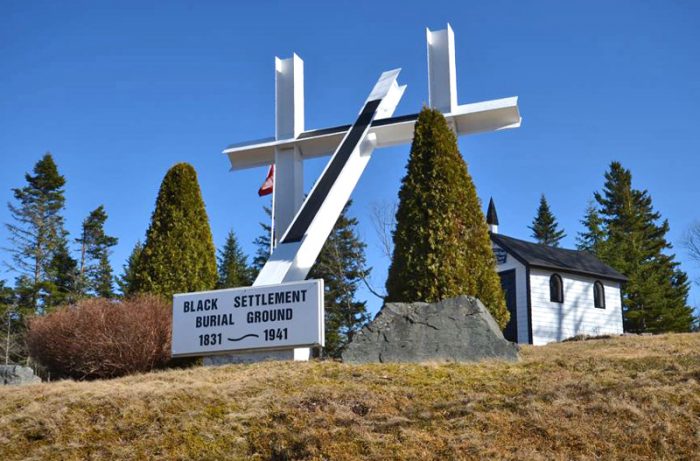 This small meadow marks the memory of a once vibrant community, the Willow Grove Black Settlement. Its significance goes beyond local history, to the War of 1812 between Canada and the United States as well as slavery in the US.

The tiny church is a scaled-down replica of one that stood there a hundred years ago. Looking in the windows, you see photographs of what that church looked like, and the community around it. Also notices and papers pertaining to the settlers and land grants of 200 years ago.

The cemetery is beside the church but there are no longer any individual grave markers. Two large granite markers tell you the history of the site and the settlement.

The settlers at Willow Grove were African-Americans who escaped the United States during the War of 1812. Royal Navy Commander Alexander Cochrane invited them: “…they will have their choice of either entering into His Majesty’s Sea or Land Forces, or of being sent as FREE settlers to the British Possessions in North America or the West Indies…”

So slaves took him up on this offer. Some joined the British armed forces, in a newly formed Corps of Colonial Marines. About 4000 people left the Chesapeake Bay area in 1815 on British vessels. Many went to Nova Scotia, others to Trinidad. But nearly 400 came to Saint John in New Brunswick on HMS Regulus.

The new settlers received grants of land east of Saint John. Each grant was about half the size of those given to white settlers who also came. The land was less arable and farther away from the desirable Saint John River Valley. Still, they made a community here at Willow Grove. They farmed, ran businesses and raised families. They built a school and the church.

Over the following century, the community dispersed. The church burned down in 1931, grave markers in the cemetery disappeared. Only the cleared field where they stood remained.

But in the 1980s, descendants of the Willow Grove settlement brought back their history. They built the tiny church, using photos of the original. The sign and cross tell passersby what this place was, invite you to stop. Invite you to feel the lives lived there.