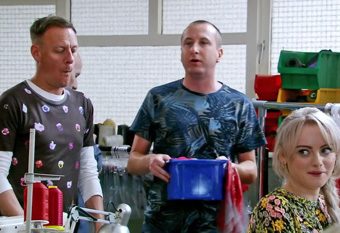 Kirk to Jenny: “Eva’s Man U and you’re Weathy County.” He totally nailed it but, oh boy, what a thing to say.

Eva suggested a double wedding for her and Aiden and Jenny and Johnny. Not something Jenny would want ever with anyone. It’s her day and she wants to be the star. Sean says, if it were him, he’d only agree “if the rival groom were absolutely hideous.”

Kirk agrees it would be hard for anyone standing next to Eva because she is “like a goddess.” Having already made things bad, he then digs himself in further with his soccer league analogy about Manchester United and Weatherfield County teams.

Then Johnny tells her, that like it or not, she has to do it for Eva’s sake. No!!! She agrees in the end, but hardly graciously.

This wedding, if it happens, is going to be fun. It has all the potential

anyway, and Kirk just topped it off. If there might be any way on earth that Jenny might ever willingly share the stage with Eva, Kirk’s words, Man U – Weathy County, will keep popping back in her mind. Bridezilla will not be an adequate term for Jenny.

Add to that Maria as Eva’s unwilling and unhappy bridesmaid, and both the wedding itself and the lead up to it should be wonderfully bitchy. Unfortunately, Maria is suspicious of what’s up with Eva and Adam. I so hope that those suspicions, which she has shared with Aiden, don’t derail the wedding.

Eva is going into this for revenge and public humiliation of Aiden and Maria and, now, his entire family. And she has the wherewithal to do it. Spectacularly, like a goddess. Like Man U at the top of their game.

Kirk and Beth’s wedding was as wonderful as I’d hoped. But there were last-minute

jitters, and those gave me my scene.

Kirk is late for the ceremony, making everyone nervous. Beth fears he’s backed out. And she doesn’t even know about his wibbly spell the previous night.

The registrar says the time on their booked slot is running out, the couple booked next fuss about their wedding maybe running late, the guests mutter about a

no-show groom. Beth doesn’t want to hear any of that, so she’s out front on the steps, nearly in tears. Sinead is with her. Beth tells Sinead she thought all the bad times with men were behind her now, thought Kirky was the one.

As she tries to reconcile herself to being

jilted, Kirk jumps out of a van, carrying a boombox and singing along with it – “Prince Charming”. He’s Adam Ant. He’d decided to find the outfit she’d wanted. He wanted to surprise her, go beyond her expectations. He wanted to show her he’d do anything for her because he loved her so very much. Beth wasn’t the only one in tears! I was too.

Later, during the reception at the Rovers, there was an unintended heartbreaking moment. Kirk wants to give his speech, so he yells above the noise, asking for “a minute of silence”. Tracy laughs, “Why, has somebody died?”

In a coincidence of timing, it happened that episode aired in Canada the same night that Anne Kirkbride (Deirdre) died. Soon after hearing that sad news, watching Corrie and trying to absorb the fact that we’d never see Deirdre again, hearing what her on-screen daughter said sent me into tears again.

Somehow though, if that line had to occur on that particular night, it is right that it came from Tracy. Even when she doesn’t mean to, she can put her foot in it. I could see Deirdre’s look of shock and hear her – “Oh, Tracy luv! What a thing to say!”

around. At first sight, I knew this is going to be good! I am glad, of course, that they are the other side of the wall of fiction. In real life, I would keep as far away from them as I possibly could. But at a safe remove, they are fun to watch.

Thursday, they completely took over from the minute the door opened to show them standing there like the witches of Macbeth. Then they saw Jason and assumed he was the

fiancé. Mother and grandmother were gobsmacked. Arlene too, but she recovered quickly and moved in. Straight across the room to him, every muscle and nerve ending ready to pounce. And only Jason could stand there, completely oblivious, as those three salivated like he was a meal on a plate.

Beth corrected them: Jason was just there to fix the radiator. Kirky would soon be home. When he walked in, simultaneously, three faces filled with lascivious interest changed to disappointed amazement. There is this standing in her living room, and that is what she’s marrying?

The Tinkers continued their takeover of the living room; making themselves at home, demanding tea, criticizing plans, making Kirk nervous.

Next night, the eve of the wedding, they thought they were alone in the house. So they voiced their opinion of Kirk – packs boxes and talks like Goofy – and Beth’s wisdom in marrying him. They did not know Kirk was there, on the stairway listening to every word.

He has had enough difficulty believing that Beth, a goddess in his eyes, would actually

marry him. Now he’s heard her family express those same doubts. Poor Kirk. I hope he believes Chesney’s words, that he is a good man. A man to be respected and emulated, with the integrity of Superman.

At the kebab shop, Chesney speaks for us all as he tells Kirk to just do it now! Kirk still wants a bit of drama for his proposal so he hides the ring in Beth’s kebab. Outside on the street, they start to eat. In the shop, anxious faces peer out the window. Ches, Sean, Julie and the others are holding their breath, like us, hoping against hope that nothing goes wrong.

It does. Worried about fitting into her bathing suit on their upcoming vacation, Beth

throws her box of food away. No! There is a ring in there! When she realizes that, she scrambles to help Kirk go through the garbage can. An audience grows around them. Eccles joins in, seeing scraps of food she can grab. They find the ring, Eccles survives Beth’s wrath, and Kirk goes down on bended knee and asks her to marry him. Julie and Sean add a bit of song. “When the moon hits your eye like a big pizza pie, that’s amore.”

Beth is over the moon, so happy with her Kirky and her ring. All week Kirk has been event-planning the perfect proposal moment. Each time went very wrong. Was he ever going to find the moment? Would he lose the ring? Beth thought his strange behaviour meant that he was going to break up with her. Ches dreaded a horrible flight to their sun vacation with both Kirk and Beth tense with anxiety. We can all now, with Chesney, heave a huge sigh of relief.

I look forward to the wedding. The props department outdid themselves with that ring. What will they do with planning a wedding for Beth? I can’t wait to see.

Interspersed amid the turmoil, a little tale of giving and goodness unfolded this week thanks to our Kirk and young Craig.

Beth wants a fancy necklace for Christmas. To make the money, Kirk goes into the turkey selling business. He’s really not good at it so Beth’s son Craig helps him out for a cut. Then Chesney, indirect source of turkeys, has reason to think they are stolen goods and tells Kirk they have to get rid of them fast.

Turkeys, frozen in blue plastic wrappers, bob on the canal. Kirk says that ice is lighter than water so they won’t sink unless they thaw which they won’t do in December Manchester waters. When Chesney asks, in amazement, why Kirk hadn’t told him that earlier, Kirk says he’s always wrong about things. Since Ches hadn’t said anything, he figured he must be wrong on that too. He wasn’t, the floating turkeys made the front page of the Gazette.

But Kirk has taken people’s money and now has no turkeys. So he goes to Freshcos and buys more at a higher price. He arranges delivery of Emily’s turkey, explaining it will be larger than she had ordered. But not to worry, he won’t charge her extra. She is pleased –  Norris won’t be able to complain about no leftovers.

Where will they live?

Even more in debt now, he worries about money for both the necklace and for a deposit on a flat because Peter has given

Beth her notice. Kirk despondent is a very sorry sight. Then Beth runs up and smothers him with kisses. She found the necklace hidden in Craig’s dresser drawer. Isn’t Kirk the clever one, trying to hide something from her. Kirk has no idea what she’s talking about. Later, telling Craig, the light bulb slowly comes on. You bought it, he says. Craig admits that he sold his iPod so he could buy the necklace for Kirk to give Beth.

Necklace solved, but a place to live not. Kirk asks Maria if they can stay with her for a few days. Absolutely not. How can Kirk tell Beth that his sister said no?

Snowflakes fluttering down, the odd little family sit on the Maxine Peacock Memorial Bench, Santa hats and earmuffs on, eating fish and chips while Beth says how wonderful is

life and how wonderful is Christmas going to be! Kirk tries to put them off Maria’s place. The telly’s broke, it’s cramped, Marcus cooks fancy food. Just as Beth realizes there is something he’s not telling her, Maria comes outside and begrudgingly says you can stay with us for a few days. Beth is happy, Kirk is relieved. And they look forward to their perfect Christmas together.

And back to Kirsty

On the week’s story of horror, the escalation of Kirsty’s violence and regret has been riveting and Tyrone’s fear and loathing of her palpable. Fiz has, well, annoyed me. I can’t decide if her inability to stay the hell away from him for five minutes so he doesn’t get beaten to death is believable for her character or if it is evidence of plot-driven

writing to hurry along the big confrontation. If that question even comes to mind, I think it shows plot contrivance.

My husband summarized the storyline very well: “Reminds me of the skit with Carol Burnett and Tim Conway, a wrong number in the middle of the night.” I watched it and, yes, absolutely. Here it is.