Stick with what you do well and others can’t do – that’s my suggestion for CBC Radio. 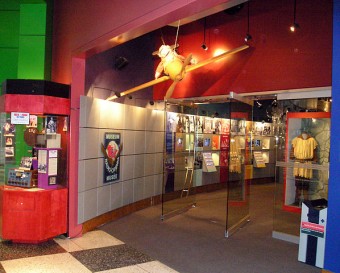 An example, from this past week’s Sunday Edition, the story of The Investigator, a 1954 CBC Radio play about the McCarthy Communist “witchhunts”.  Two important points:  one, the power of drama as social and political commentary and two, the power of a broadcast being heard across an entire nation at exactly the same time.  CBC Radio can do that, your hometown radio station cannot.

So if programming must be scaled back due to less money, cut what others do and keep what fulfills CBC’s mandate as a national broadcaster.  If I had to do a quick and drastic cut, it would be local programming:  the morning, noon and ‘drive-home’ time slots.  I’d keep national and international news, documentaries and drama.

Local information is valuable if you live in the locality.  In southern Ontario, “local” programming comes from Toronto.  It doesn’t matter even a tiny bit to me what traffic in Toronto is like.  And while it can

be entertaining hearing what Toronto City Council is doing, I can live without it.  If it’s deemed necessary to keep regional programming, cut each time slot to one hour and have production staff and hosts work part-time or split shifts.

A Facebook friend’s comment on CBC Radio was that he’d listen more if it had local news relevant to him, in London Ont.  Doing just that was the reason for the much ballyhooed local news break on the half hour inserted by CBC into its programming a few years ago.  All that has done for me too often is interrupt the thread of interviews and documentaries for a weather “update” six or ten hours old.  Being in touch with regional communities is a good idea, but that way of doing it hasn’t worked.  I don’t know how much that 90 second break costs, but it’s not worth it.

Local is good if you are local to CBC station

in Gander, it wasn’t relevant.   I remember when CBC Newfoundland planned to shut down regional stations and programmes across the island.  There was outrage.  Gander, Grand Falls, Corner Brook all wanted to keep their own CBC local programming.  Traffic reports weren’t going to make that much difference to the day’s decisions, but people wanted their broadcaster to reflect their lives.  Valid point.

I’d like that in St. Thomas too.  But I’ve never got it from CBC in Ontario.  In St. Thomas, London, Windsor or Owen Sound, you get Toronto.  Faced with the choice of Don Valley Parkway traffic reports and who’s singing where in Toronto or in-depth national and international news and socio-cultural analysis, I’ll pick the latter.  CBC Radio should put its resources into what other, local radio stations do not do.  If I want to hear St. Thomas news, I’ll switch to 94.1 myFM for its hourly news, then go back to CBC.

CBC is where I’ve been able to hear documentaries, political and cultural analyses, literature discussions and radio drama.

Make Radio Two a definable station as it used to be (i.e. not a mishmash of music genres you can hear elsewhere). Also keep RCI alive.  Make greater use of existing regional facilities and staff for national programming from areas outside the Toronto broadcast centre.  Play RCI programmes like The Link if more repeat broadcasting is necessary on Radio One.  (Also see my praise for RCI The Link here.)

International’s The Link, produced in Montreal, airs from 2 to 3 a.m. Monday to Friday on CBC Radio One.  It is available in podcasts, but is not replayed in any other time slot, unlike all other programmes on CBC Radio these days.

I’ve thought that it was unfortunate that the show is not better publicized. Yet, at the same time, I liked having this listening

pleasure shared only with what I imagined to be a select few insomniacs, night people and graveyard shift workers.  You get to know some of them through their letters, voice messages and emails – from Canada, England, Sweden and elsewhere.  Yes, it’s RCI so it broadcasts on short wave and satellite.  You could call it the Voice of Canada Around the World.

RCI is gone from air

As of June, that Voice will be silenced.  That includes The Link and all other RCI radio programming.  CBC’s first act after the 10%

funding cut in Harper’s 2012 budget was to cut RCI.  Instead of radio programmes, the skeleton that remains of RCI will create web-based programming.  That’s fine for thems in Africa and Asia and elsewhere that have internet access.  Not so good for the many who have only a transistor radio with shortwave capacity.  Oh well, they’ll still have Radio Netherlands, Radio Australia, Radio Sweden, Deutsche Welle, Voice of America, BBC World Service and every other country’s international broadcasting to listen to.  But they won’t hear from Canada.

Showing Canada to Canadians too

You don’t have to be outside Canada to enjoy The Link.  But because it is produced with an overseas audience in mind, you learn a lot about parts of our country and society not covered by other Canadian media.

Until June 2011, it was 2 hours nightly.  A drop in revenue shortened it.  The new format cut one of my favourite features. ESL teachers who presented common linguistic 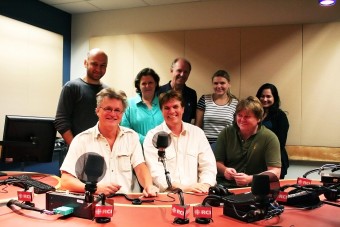 errors or grammatical anomalies for non-native English speakers.  Even being a native speaker, I found them fun and indeed helpful.

The sports report continued, thank heavens.  Whether it’s Ian Jones or Terry Haig in the studio, you get 5 very funny minutes packed with information on sports rarely covered by other Canadian broadcasts. Ones like soccer, cricket, rugby and cross-country skiing.  You don’t even have to actually like cricket to like their reports on it.  They also give interesting takes on hockey and other mainstream Canadian sports and athletes.  Besides Stephen Colbert’s ‘spor repor’, The Link’s is the only sports news that I want to hear.

Another great segment is the Friday visits by Raymond Desmarteau, host of RCI’s French-language Tam-tam Canada.  He shares the music of a French-Canadian artist with the Anglophone audience of The Link.  In turn, The Link’s host Marc Montgomery visits Desmarteau’s programme to introduce an English-Canadian musician to Francophone listeners.

I once had an old Chevy Monza hatchback, a ’75.  It came with a banged-in fender that didn’t seem worth fixing.  The rest of the body was so rusted that, well, what would be the point?

The car was bought as an immediate and probably short-term solution to my previous car dying at a time I had very little money.  But I quickly grew to love it.  It was my baby muscle car.

I realized that car needed rock and roll.  Until then, and since, my radio dial just stays on CBC.  It might flip from Radio One to Radio Two but that’s it.  But not for a Chevy Monza.  I had to search for a rock station that I could tolerate listening to.  It’s what the car wanted.

The car got something else in its life with me.  It was the exact same shade of orange as the City vehicles.  One day I came out to find very large City decals on both doors, the same as City dump trucks, pickups and cars had.  As I told the City workers that came to my door a couple weeks later to remove the decals, I don’t know where they came from.  The City workers used a blowtorch to take them off, which didn’t do a lot for the car’s paint job.

But for the time the decals were on the car, it was fun.  I could park anywhere.  I got very odd looks from City employees who saw it.  The condition of the car really was a disgrace.  I avoided driving it anywhere near City Hall, but the City officials still tracked me down and sent men to take my decals.  The car died forever not long after that.

I went back to CBC with my next cars.  There’s only been one car since then that

demanded its own music.  That’s my Mini Cooper S, and it’s only sporadic.  On sunny summer days, it wants old rock and roll.  The car and I welcome the first warm, sunny day with the Beach Boys.  I crank the volume and roll down the windows.  “Daddy took the T-bird away” and “Little Deuce Coupe” speak directly to my foot and gear-shifting hand.  I got six gears and I want to go through them as fast as possible.

Other than the Beach Boys, girl groups and Jerry Lee Lewis, the Mini is happy to listen to CBC Radio One and Two.  But hot summer days need summer music. And summer music makes me think fondly of a poor, battered up old Chevy Monza.

St. Thomas now has its own radio station – 94.1 FM on the dial.  I’ve got it in the presets, just in case. And, just in case you should want them, here are some classic songs to drive to.