Writing on the Wall

Writing on the wall literally and figuratively for Steve. Graffiti was the apt background for a shifting of his world, which would now be controlled by Nick. 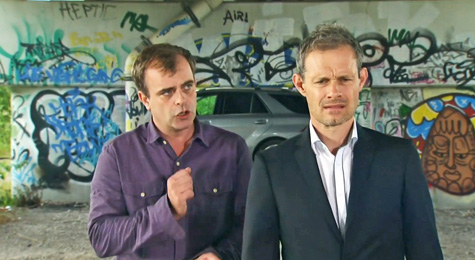 Let’s go for a drive, Nick said to Steve. Then he parked beneath an overpass. Time for a talk about what’s what and what will be, he told Steve.

The talk spanned Wednesday and Thursday’s episodes. Likewise, the graffiti spanned the bridge and covered every girder. It was so much there that it almost overshadowed what was happening between Nick and Steve.

I don’t know if this was a location or if set designers created it. It was like an artist’s rendition of an architectural plan – the idealized more than the real. If that overpass doesn’t exist somewhere in Greater Manchester, it should.

It set the mood perfectly for an almost surreal scene between the two men. Their discussion, complex and lengthy, was about the future life of an unborn child and all the people who would be part of that child’s life – or wouldn’t be. They battled and negotiated as if in summit talks over policy and procedure. 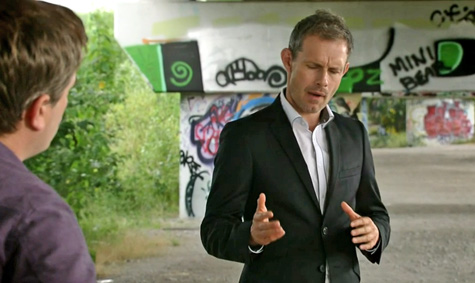 And they were, I guess. It was a summit on claiming and rearing a child: how, where and with whom. Steve was surprised. So was I. I hadn’t really thought about where Nick fit in this little drama of family secrets. I don’t think Steve had either. He, like me, has been preoccupied with Liz and how long she would be able to keep quiet about who was Leanne’s real baby daddy.

I, unlike Steve, was also worried about him. How long could Steve maintain a neighbourly interest only in Leanne’s pregnancy and baby. And, of course, even if they all pulled it off, when would some medical emergency happen that required the child’s biological parentage to be investigated? 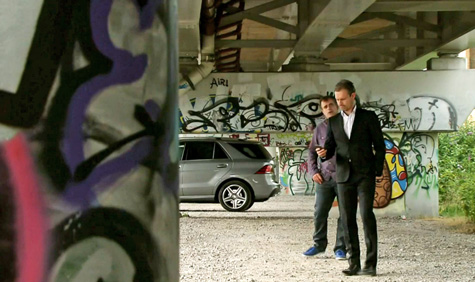 But what I hadn’t thought about was what kind of power this situation gives Nick in the short and long term. He can keep everybody’s lives just as they want them – or he can blow them apart. He made that very, very clear to Steve under that bridge, amid the graffiti. 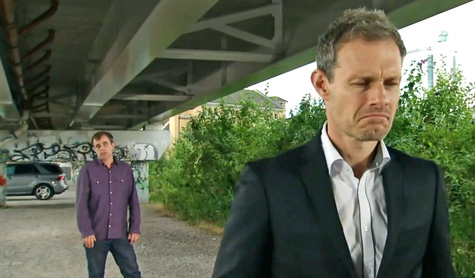 The t-shirts for this storyline wouldn’t be about whether momma was happy. Instead, they’d read “If putative daddy ain’t happy, ain’t nobody happy.”