Filmmaker Patrick Reed was on CBC Radio’s Q, talking about his new film, Pet Pharm. (It is no longer online, but Hye’s Musings has a good post about the film.) It is about the booming business in pharmaceuticals – for pets.

The pharmaceuticals for people industry is already huge, and increasingly so for pets. Michael Schaffer, in his book One Nation Under Dog, has a chapter on it (see my Fur Babies post.)

Drugs are possibly a big part of the $47 billion that Americans will spend on their pets in the next year (that figure comes from a trivia question on freekibble.com). Maybe it is money that would be better spent on starving children in the world, as Patrick Reid obliquely suggests.

And maybe that’s a comparison that is really beside the point. Maybe the money spent each year on psychoactive drugs, big screen tvs, Xboxes, running shoes and high-end jeans for North American adults and children would also be better used feeding and healing malnourished children. 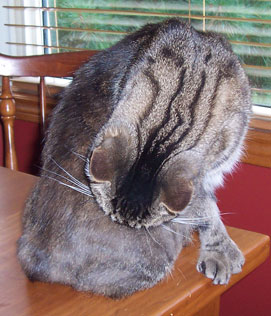 I have had a bit of experience with psychoactive drugs for cats lately. One cat has been picked on by another ever since she was a tiny kitten. As a result, she developed obsessive-compulsive licking to the point of open, bleeding wounds. Her veterinarian thought at first it was mites or allergies so she had some tests and strict diet control. We tried a drug for allergies that worked a bit. Then more open sores. I became convinced it was stress, maybe compounded by skin sensitivity. We then tried a dog and cat “tricyclic antidepressant” called Clomicalm. It worked for a while. Made her very sleepy, but when she was sleeping she couldn’t lick herself. Then the calming effect of it started to wear off. She needed more and more of it. There’s only so much you can safely give.

I saw no cure short of a change of home for one or other of them. But that didn’t seem a likely option. Finding a home for any adult cat is difficult. But a ten year old not awfully pleasant one? Or a formerly feral cat scared of anyone except us? Euthanasia for one or other of them? I considered it. Life for the young one was not good, but another home likely wouldn’t be an improvement for her. The old one had less life ahead of her, but did she deserve to die because she doesn’t like other cats? No. But the stress of one cat licking herself raw and the other hissing, spitting and attacking was making me want to stress-lick or tranquilize myself.

In desperation, I called my vet. “Give me drugs – the strongest you’ve got. Some for me while you’re at it. I don’t care if we’re all comatose as long as this stops.” “Well, there is something new we’ve got,” she said. “It’s called Feliway and it’s like a room air-freshener.” “I’m on my way.” She said it’s essentially the pheromone that cats exude when they’re happy, put in a bottle. There’s also a dog version, D.A.P., advertised in Pets Magazine, a good Canadian magazine you can get free at vet clinics. 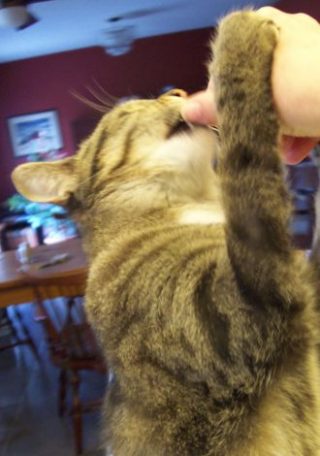 For a year now, I’ve kept a Feliway diffuser in the hallway. It works. The fights haven’t stopped, the stress-licking still happens. But, overall, there’s peace in the valley. There are tricks to using the Feliway effectively, and when things go wrong, they go very wrong very quickly. (An example: don’t put it close to their water or food.)

When the little cat went for her shots this year, the vet was distressed to see the raw welts on her belly. She’d forgotten how bad she looked before. I told her I wasn’t worried because her belly and her attitude were so much better than before. Both the cat and I could live with some sores. She probably will have them for as long as the old cat is alive. And knowing that cat, I imagine it will be a good few years more.

So do I think giving psychoactive drugs to pets is bad, wasteful or the lazy way out of behavioural problems? No, not if that is the only solution aside from euthanasia and if a better home for the animal isn’t a viable option. It shouldn’t be the first method tried and it shouldn’t be seen as “normal”, any more than having every kid hopped up on Ritalin should be seen as a normal response to over-exuberance. But if it works when nothing else does, that’s good enough for me.

One week ago today at 7:15 pm AT, my dearly beloved Standard Poodle Leo died. He was about 14 years old. He’s been with us for eight years and 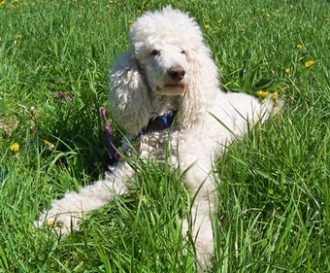 six weeks. Since 2012, he had severe arthritis.

Arthritis and old age finally took him. Took a big chunk of our hearts too.

This post was first published Jan. 30, 2013 on my St. Thomas Dog Blog in memory of Leo’s predecessor Jack.  Now it’s in honour of Leo too.

Five years ago today at 2:15 pm ET, my beautiful German Shepherd Jack died. We had his vet euthanize him before his body did it by itself. It was getting pretty close; I don’t think he would have survived another night. He had a number of physical ailments. We don’t know exactly what all. but I suspect a fast-growing cancer was involved. He was only 9 3/4 years old. He had been my best friend, teacher and “baby-dog” for 9 1/2 of those years. 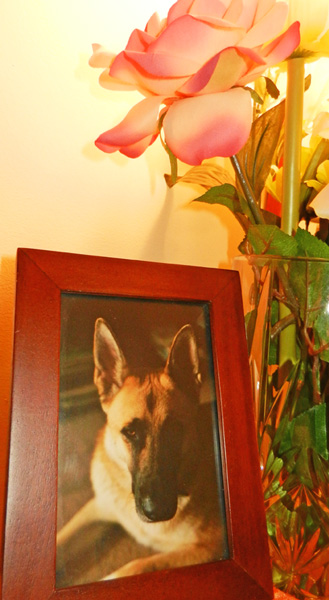 One problem he had in his last year was arthritis in his hips. He would get up slowly and painfully. He would shift position a lot, trying to get comfortable. I gave him Medacam for it. I don’t know how much good it did because other ailments began developing soon after. His arthritis became the least of his problems.

My dog before Jack, Jamie, had developed severe arthritis in his legs. Poor soul got so he could hardly walk at all. Lying down was almost as painful for him. At the time, the only thing I could give him for pain relief was a Bufferin once a day. He could have had cortisone shots but I didn’t want to due to the bad side effects of steroid drugs. In retrospect, I might as well have tried it.

Leo, one of my present dogs, is arthritic now. X-rays a year ago showed severe damage to his hip joints and his spine. So we are getting to know all the pain relief medications that now exist. There are a lot more than sixteen years ago when Jamie needed something so badly.

Leo started on Medacam. It can work wonders but not for Leo. So he went to Deramaxx, another anti-inflammatory. Again, when it works, you can see the change and, again, there wasn’t a visible improvement. So now he’s getting shots of Cartrophen in addition to the Deramaxx. It is said to mend cartilage. His doctor said you should be able to see a difference after a couple of shots. After three shots – don’t know. We will ask about the next level of treatment. (2016: the drug combination that worked best for him was Gabapentin and Deramaxx,}

Jamie and Jack showed classic signs of arthritis; stiffness when rising, limping after exertion. Leo’s early symptoms were quite different. He began slipping even when standing. Because Jack developed severe problems with his paw pads getting paper-thin, I first checked Leo’s feet. They looked fine. We googled it: can be due to arthritis. His vet explained: even slight movement isn’t easy with stiff joints so there can be a loss of balance. Slipping, if not falling, can be the result.

I read “A Case History of Maggie” (sorry, link is gone at Senior Dogs Project). Maggie, an elderly Golden Retriever, could no longer squat to do her business and would do it while continuing to walk. I hadn’t thought of that being connected to arthritis in the back legs but it makes sense. Restlessness, moving from place to place to sleep, can mean arthritic pain. All these may be less obvious signs of osteoarthritis.

Our present dogs came to help all of us, including the cats, fill the void created by Jack’s death. They have done that and more, but our happy, very silly boy is never forgotten.

(My Dog’s Arthritis has more. Commodity Dogs tells the story of how Leo and Charlie came to us.)