Despite the sight of Tracy Barlow lying bloodied on the ground by the Barlows’ back door, the

scene this week for me was Emily Bishop telling Tracy just what she thought of her.

Mrs. Bishop said, I think, what we’d all like to say to Tracy only she was more polite about it. “I’ve known you since the day you were born and I’ve never been more ashamed of you in my life.” The implication was not lost on me that Emily has had plenty of reason before to be ashamed of our Tracy. As everyone has. Especially Ken and Deirdre. What can Deirdre being thinking to continue supporting and justifying that girl? A mother’s love, yes, but a mother’s blinders?

Tracy arrived back Christmas Eve, and what an entrance! A lovely carol sing on the street, snow lightly falling. Ken reading a poem (especially commissioned for the episode, I read, from the poet laureate Carol Ann Duffy).

Tracy Barlow is back in town!

Then into this Currier & Ives scene, a black

taxi pulls up. High heeled shoes and fishnet stockings get out of it. Who is it? The wicked witch.  Tracy Barlow. “Oh no, not her!” I groaned aloud. A miscarriage of justice, she said about her murder conviction, tainted testimony. The only person glad to see her back was Deirdre, and I suppose Ken. 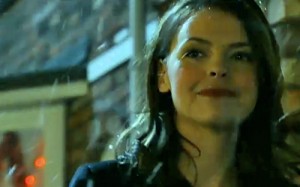 Then a week of Tracy offending, alienating and implicating her way through neighbours, friends and family. You quickly realized an Agatha Christie worthy murder mystery was being set up. Everyone was going to be in the suspect line. Words that could be taken as death threats were uttered by many. Death wishing looks were cast Tracy’s way by even more people.

Tracy slept with both Platt boys, back to back. That alone would guarantee three murder suspects – David, Nick and their momma.

But the line doesn’t stop there. And, after swanning around the Rovers on New Years’ Eve, she added Sean and Mary to the list of people seriously annoyed at her. And I wouldn’t trust Mary too far. Tracy doesn’t know it, but Mary may be more deranged than Tracy herself.

Even before Friday’s double episode, we were wondering if Tracy’s murder would be a group effort by everyone on the street, as in Christie’s Murder on the Orient Express. And, lo and behold, on Friday, Deirdre and Ken mentioned that book, one of many literary allusions on the Street this week.

So who dun it? Steve was caught red-handed (literally) over Tracy’s unconscious body. But she was still alive. “Oh no,” I groaned yet again when she was shown in hospital.

The only saving grace to Tracy is sometimes she says things to people that, while cruel, are so apt that you only wish that you could say something like that yourself to people who really do deserve it. But you can’t because you’re not as horrible a person as she is.