Thursday, Anna and Tim tell Faye there is another option for Miley.

Jackson’s parents want to raise her. Faye sits on the couch beside the baby’s bassinet and considers their futures. So quiet and sad, but emotionally detached. I was heartbroken, thanks to inspired choices of camera shots and costume.

Looking at Faye, all I could focus on was the kitten on her t-shirt. Sweet baby face of innocence. Then the camera moved to the

bassinet; another sweet innocent lay there gurgling happily. She was unaware that her future was in limbo. Would she be staying in the place familiar to her, talked to and held by the only voices and arms she knows? Or would she have to get used to being held by strangers in a new place, without comfort of returning to those she knows?

But there’s a third baby face too, and that is Faye. Still a child herself, she wants to – and perhaps should – experience and enjoy growing up without being dragged into adulthood too soon by raising a child. There is no shortage of adults who are willing to care for Miley, but the children who produced her are not so sure.

Both Faye and Jackson realize the gravity of their situation, and they know that Miley is their responsibility. But they really are just too young to be anything but terrified by the thought. Having Miley

around is more like having a new baby sister than a child of their own. But it’s hard for either of them to articulate that to themselves, I think, let alone their parents.

That’s where Tim has been brilliant this week. He – self-professed no contender for Father of the Year – has handled the situation sensitively and directly without ever pretending to know any of the

answers. He listened to Faye when she freaked out at the christening. When Jackson’s parents suggested that they take Miley, he listened to them. He somehow talked Anna into hearing them out. And then he did something it seems no one else thought to do: he listened, and talked without lecturing, to Jackson.

Faye, on Tuesday, tells her mother: “I just wanted him to like me.” Heartbreaking. No

matter how far back in memory it now is, I bet every woman watching remembered this.

For Faye, the gamble didn’t pay off. The boy didn’t want to know her afterward, and that was even without knowing she got pregnant. And now she’s got a permanent souvenir, a baby girl.

In light of the rest of the week, Faye’s plan for giving birth starts to make sense. Do it secretly and leave the baby at the hospital. Don’t involve anyone else. Of course it would not work as smoothly as imagined, as she learned. But the flap and fuss she dreaded and wanted to avoid is happening. Police, social workers and families.

Faye found out her mother is not going to “send her back,” as the poor child had feared. Anna, Owen, Tim and everyone rallied around her. The baby will have a loving and supportive family. They all took that as a given.

But they didn’t ask Faye if that’s what she wanted. Maybe in the same way that they totally did not see Faye’s pregnancy weight gain, they are not seeing her lack of bonding, even enthusiasm, for her infant. Anna reminds her that the baby is hers and she will be the one responsible for her care. But it sounds much the same as maternal reminders to

take care of your good clothes or those expensive shoes you wanted so badly. No one is looking at Faye, or asking her what she wants.

Faye eventually tells Sophie, and Sophie passes on a hint to Owen. And that’s where we end on Friday: Owen pointedly makes space for Faye to say what she wants to her family and the social worker. Faye takes the opportunity finally. She wants to give the baby up. 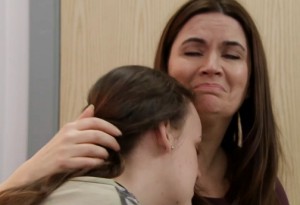 She might do so or not. But you know, whatever the decision, Owen will be the object of Anna’s wrath for even allowing the possibility to be raised. Anna seems to have already decided the future of the baby and Faye, all in the name of love.