Marie Rundquist writes about her journey into her family history. Not the history she heard from her mother and grandmother, although it’s part of the story. The story Ms. Rundquist tells starts with a DNA test she took.

The test didn’t lead to what, and where, she expected. Instead, it took her on a long journey through US archival history and then to Nova Scotia.

Marie Rundquist lives in Maryland and was born there. She decided to do a DNA test to learn more about herself, and the results surprised her. Some genetic markers didn’t add up with what she’d been told. So she started looking for the pieces missing in the family stories but present in her genes. Her tale is fascinating. I read part of it on the Cape Breton University website.

I am bemused by the popularity of DNA testing. It’s interesting, sure. Useful for medical information, of course. But its value for identity, for who you are? As the memes say, if you need a test to tell you that you are X or Y, you’re not.

So I surprised myself when I became engrossed in Ms. Rundquist’s story. Even the scientific bits. She explains DNA testing so that even I can understand it.

Then she starts the story, or stories. One her mother and grandmother told her. The second begins with the mtDNA test. It shows genetics through the maternal line. For Ms. Rundquist, the two didn’t match. Some genetic markers showing place didn’t make sense with the geographic history she had been told.

Like a forensic sculptor, she fleshed out the genetic skeleton. Her clay was archival materials and a community of relatives. The relatives weren’t those she knew. They were the list of genetic matches provided by the DNA testing company.

With their help, archives and her mother’s stories, she traced a journey back in time. She found a new history. Some parts intersected, others were way off. But put together, it’s a fuller story. Still not complete, but with new layers that mesh even if gaps remain.

The gaps are as interesting as the filled spaces in the way Ms. Rundquist writes about what this means for her self-identity. If you’ve ever said “I know I’m X but I don’t know how,” or “I thought I was X but found out I’m Y,” read this.

It shows the beauty of a journey. There are some answers, but best are the loose ends. They invite pondering, by readers as well as the writer, about lost history and the nature of identity.

You can get Marie Rundquist’s books, Revisiting Anne Marie and Cajun By Any Other Name at DNA-Genealogy-History. You can read my DNA Tests for a far less inquisitive look at family origins. Gallery Gevik has more of Sylvia Lefkovitz’s incredible art. 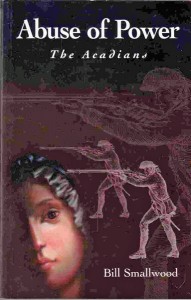 and that’s good. The Acadians

, the first novel in his Abuse of Power series starts in 1749 with the British looking for a site to build a fort in Nova Scotia. They choose a harbour they rename Halifax. It ends in 1757 with British soldiers and sailors choosing tracts of “unoccupied” Nova Scotia land to homestead. The Acadians have been deported and the Mi’kmaq are being ‘cleared’ off their lands. The French have been driven back, and Nova Scotia is open for British business.

The facts of it: war between the French and British for control of North America, deportation of long-time Acadian settlers to France and the future United States, and war with and suppression of First Nations. We know these things from living in the Maritimes or reading history. By situating the facts in a story, Smallwood brings them to life and explains the intricacies of ‘who’, ‘when’ and ‘why’.

Connecting the dots of history

I have read a lot about the colonization of North America and the history of the Mi’kmaq and Acadians. I have been to Halifax many times and traveled around Nova Scotia. So I thought I had a fairly good understanding of the history and geography of the region. But this book made so many things click into place for me. Instead of a spreadsheet of facts, the story gave me a flow of events, places and reasons. The dots were connected.

The main character in The Acadians is William Gray who was in real life a clerk to Governor Cornwallis. Smallwood promotes him to British Navy Lieutenant in order to permit him to travel to the extent he does and be privy to the discussions that he is.

But it is not only from Gray’s perspective that we look. We get to know all the players involved; British, colonial American, French, Acadian and Mi’kmaq. Fear and confusion, bravery and avarice – we see the emotions and actions of all sides. Only the Mi’kmaq remain relatively unknown to us, and I’m sure that is remedied in later volumes.

It is history that shaped Smallwood’s story and character rather than the other way around. Most of his characters are real people. Events are based on letters, logs and other documentation of the time. When he creates or alters events or characters, he explains why and gives what is actually known in notes. So you can become involved in the story and also keep track of the real events. He references his sources and changes in chapter endnotes.

My only quibble is that footnotes would save having to flick to the end of the chapter each time. You can, of course, ignore the notes but they contain archival sources as well as additional bits of information, quotes from letters and official records as well as the points at which history and this story deviate. That, I found, adds to the story.

Sadly, Mr. Smallwood passed away on May 7, 2019. Here is his obituary. The 8th, and final, book in his series is published.