Confused by many men centuries ago named Samuel, Adam, John and James Burwell in my database, I gave up trying to sort them out. I then picked up my mother’s family history binder. It pays to do that occasionally.

So here is a letter from the late Lloyd Burwell to my mother about their mutual great-great-grandfather James Burwell UEL. Also included is information on James’ brothers and father and possible connection to the Virginia Burwells. I removed only small parts not relevant to family history in my transcription. (See my Burwell Family Tree.) 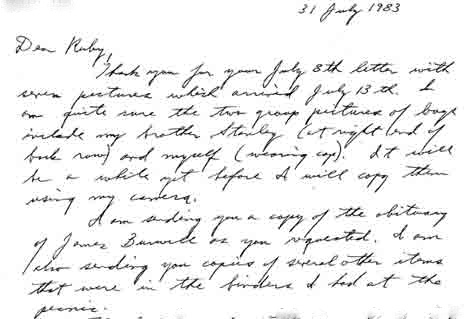 I am sending you a copy of the obituary of James Burwell as you requested. I am also sending you copies of several other items…

The list I made of the Upper Canada Land Petitions from PAC in Ottawa includes our ancestor James Burwell (No. 1 and 12) and our ancestor Lewis Burwell (No. 8). The others are the other sons and daughters of James (brothers and sisters of Lewis). The list of Upper Canada Land Grants on the same page includes James (No. 1) and Lewis (No. 10). I have copies of all the petitions and grants in these lists.

I have included copies of the Land Grants for Lewis (Warrant 3855) and James (Fiat 2347) together with the Certificate signed by Col. Talbot certifying that James Burwell had completed his settlement duties 2nd July 1819. I have also included a copy of the survey for Lot 13 North, Talbot Road East Branch. By the assignment recorded on Warrant 3855 it is evident that Lewis did not take up his Crown Grant. Instead he sold his right to a land agent by the name of James Anderson.

I had first seen the Biographical Sketch of James Burwell by Lorenzo Sabine (p 277) back in 1974 and wondered where he got his information. Two years ago I found out when Wm. Yeoger, curator of the Eva Brook Donly Museum in Simcoe, published the results of his searching old newspaper records at the Ontario Archives (OA) including the obituary of James Burwell reported in the Church of England paper “The Church”.

When vacationing in New Brunswick

When vacationing in New Brunswick in 1976 we visited Esther Clarke Wright in her home. She listed James Burwell in her book The Loyalists of New Brunswick among some 6000 Loyalists she had researched. She is a PhD; a retired professor of history from Acadia University in Wolfville NS. I did not get any new information from her.

I also went to the Dept. of Lands & Mines in Fredericton NB to look at the original Crown land grand maps. I did not find a reference to a specific lot but did get a copy of the land grant to the Regiment of 38,450 acres and reference to James Burwell being entitled to 250 acres. I believe he sold his right to his officer, Captain John Borberie.

At the PAC in Ottawa

At the Public Archives of Canada (PAC) in Ottawa I researched through microfilms of the British Military Records and ordered copies of all the Muster Rolls that listed James Burwell. I made a list (copy enclosed) of the ones I found. James Burwell had a brother Samuel and his father’s name was also Samuel. Since there is a Samuel Burwell listed on some of the Muster Rolls, we can speculate that it may be James’ brother or father.

William D. Reid (now dead) was an archivist at O.A. On p. 43 of his book “The Loyalists in Ontario” he lists James Burwell and his 10 sons and daughters who received Crown Grants of land. Actually there was an eleventh child, Timothy, but there is no evidence that he applied for or received a Crown Grant.

I am enclosing a photocopy of the monument in Fingal cemetery near the east gate having inscriptions on three faces for 1, Lewis Burwell, 2, his wife Levonia Williams and 3, Laura A. Kennedy. I transcribed Laura’s year of death as 1881 but have since found her mother Amy [d/o Lewis and Levonia] age 25 in the 1881 census so Laura, being age 15 at death, must have died in 1891.

I am enclosing a photocopy of a 1908 newspaper clipping I found in a scrap book at the O.A. about Levonia Burwell, wife of Lewis. Lewis died at age 42. Did you ever hear what the cause of death was?

I am enclosing copies of p. 327 and 328 from Vol II July 1920 of Tyler’s Quarterly Historical & Genealogical Magazine. The chart supplied by Mr. Raymond W. Smith of Orange NJ shows our ancestor James as being a first cousin of Col. Mahlon Burwell. Maria Burwell who married Howard Johnson spoke of Mahlon Burwell being a cousin of her father Lewis [s/o James and Hannah]. According to this chart they would be 1st cousins once removed.

I am also enclosing a photocopy of a 1935 newspaper account of the celebration of Maria Burwell’s 100th birthday. I believe I copied it from a clipping owned by Gertrude Bowes of New Liskeard, Ont.

I am enclosing photocopies of the last two pages of a 16 page article by Archibald Blue in 1899 about Col. Mahlon Burwell. He quotes Lorenzo Sabine in the Biographical Note with reference to James Burwell, then states that his relationship to Adam Burwell, the father of Mahlon, is uncertain. I have a copy of Adam Burwell’s petition for land which Archibald Blue states “appears to be lost”. The record is with the Upper Canada Land Petitions at PAC in Ottawa.

In James Burwell’s 1811 petition for land (Vol 37 B10/24) he states that he sent his brother (not named) with his cattle and goods from Presque Isle on the south side of Lake Erie to Upper Canada on or about the 1st day of July 1798 and that he arrived with his family in the Township of Bertie on or before the twelfth of July 1798. It would appear that the date 1796 stated in James Burwell’s obituary and all subsequent quotes by others is in error. Adam Burwell also affirms (he was a Quaker at the time) that James Burwell’s cattle and goods were brought to his farm in Bertie about the 19th of July 1798.

No mention is made of the relationship of James to Adam. Adam Burwell came to Upper Canada 12 years earlier than James, i.e. in 1786. He had been a spy for the British during the Revolution.

I am enclosing photocopies of the 10 pages of genealogy of the Burwell family of Virginia as recorded in Colonial Families of the Southern United States of America. It is Edward Burwell identified as 2-6 at the bottom of the 1st page (p. 94) that is referred to following the chart in Tyler’s Quarterly on p. 328.

Mr. McDermott who lives in Fort Erie, Ont. is the present owner of the family bible of Lewis Burwell of Brantford, the surveyor and younger brother of Col. Mahlon Burwell. I have photocopies of all the family information recorded in this bible.

Lewis, writing in the bible in 1837, states that about the year 1607 or 1610 his great-grandfather Edward Burwell was named in a Royal Charter to a Plantation Company, who came from the city of London to the Province of Virginia. He states that his great-grandfather’s son John who married Agnes Lee removed from Virginia to the Province of New Jersey. He states that his grandfather John had several sons and the youngest son was his father Adam who married Sarah Vail, daughter of Nathaniel Vail of New Jersey. Also in this bible Lewis records the death of James Burwell, a cousin who died at Port Talbot on 25th June 1853 aged 99 years and 5 months.

I find it hard to believe that our ancestor John Burwell who is said to have left Jamestown, Virginia in 1721 would be the son of Edward Burwell who was in Virginia in 1648. John Burwell is believed to have been born in 1705 and Edward in 1625. This would make Edward 80 years old when John was born. It seems to me there should be another generation in between. 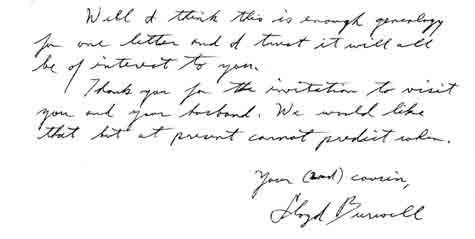 Well I think this is enough genealogy for one letter.  I trust it will all be of interest to you…

Also see my Burwells in US & Canada. I will post the papers referred to above in a photo gallery or post format.