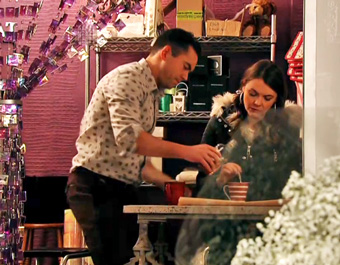 Eavesdropping on a chat in a workplace – Tracy and Todd in the florist shop. On Thursday they discussed the newest complications in Tracy’s life, a low key analysis of the situation she is in.

Amid the trauma and drama of the week, it struck me as a particularly good if somewhat odd friendship. It started when she hired him to work in Barlow’s Buys. She didn’t plan to be friends – he’s an employee and was expected to mind his own business. But he’s Todd, everyone’s business is his, particularly their dirty little secrets.

Over time, she realized that she might try but would never succeed in keeping her private life private from him. And there must be a freedom in being able to tell someone all the rotten things you’ve done and thought. Often even not having to tell, for the other person has already guessed correctly.

In this instance, she has told him about being at the Bistro and accidentally overhearing Robert and Carla talk about their fling. Then, after Robert had left but before she did, Tracy witnessed a break-in and attack on Carla. She fled, leaving Carla to her fate but also leaving her phone. Now how is she going to explain any of this to Robert, the

police and the entire street?

She does not want to tell Robert she knows about him and Carla. It is a lot of money in the knowledge bank. Invested wisely, it could make huge profits for her with him or as revenge with Carla. Looking at it this way makes sense to Todd so he takes it into account as they try to sort out how she can avoid getting entangled in a web that involves many people and events.

Tracy has one other friend, Beth. Despite her hard exterior, Beth is a good person who sees only the good in those she likes. I don’t think

she sees, or will accept, the true evil that Tracy can do. Therefore Tracy is a better person when she is with Beth. But that’s not the whole of Tracy. Todd knows and accepts, even likes, the full panorama of Tracyness – the vulnerable and the murderous of her. Being enough like her, he can confront her on behaviours and ideas she has in a way that Beth can’t or wouldn’t even think of.

Tracy listens to Todd. She gets good ideas from him, and therefore

also will listen to his warnings. She knows that they are simpatico. It is a good thing for Weatherfield that he is gay and she is female. If they were romantic partners, Tracy and Todd would be like gasoline and fertilizer – dangerous.