convalescence and Norris’ fears for his future and especially a Gift of the Magi moment with Tina and Izzy (he’s your baby; no, he’s yours).  But it was the Windass-Armstrong clan that did it for me again. Oh please, God of Corrie, make those creepy people stop!

My husband observed: “I think glad Windasses are worse than mad Windasses”. In the pub, while Tina was trying to work and maintain composure, they fawned over her. Or, in their attempt to give her some space, had happy family discussions about the baby – all within earshot of her. I cringed on Tina’s behalf.

on, either directly to her or amongst themselves. I believe that she had no right to keep the baby or put them through the nightmare that she did. However, at that moment I wished she would say to them, ‘listen up – back away now or I take the baby back.’

I know she signed the papers and can’t do that – but. Can’t they see that the best way to thank her is to shut up about the whole thing around her? Maybe even give her some space that is free of them? Even 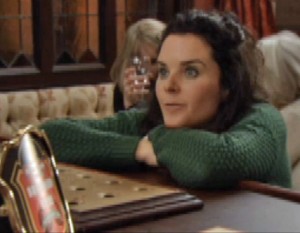 Izzy, who has much more sensitivity toward people’s feelings than the others do, can’t shut up. If she isn’t looking doe-eyed at Tina, thanking and thanking and thanking, she’s telling Tina about the baby. Or apologizing for her father. All Owen did was attempt to right a wrong by offering her back the flat. Awkward, yes, but at least he didn’t mention the blessed baby while doing it!

On Friday, Gary and Izzy once again come into the Rovers while Tina is working. He

apologizes to her and Tommy for the night before when he had been insistent they join the clan for drinks. He was drunk, he says. Not a crime in a bar, Tina says.  Being drunk may excuse his aggressive conviviality. But it can’t excuse all the other times he and the rest of them have been getting in Tina’s face.

It’s going to be very hard for Tina when they bring the baby home. Then she will not be able to avoid seeing him and them with him.

So can’t they give her a bit of a break now, while he’s still in hospital and let her go through her separation and grieving time without constant reminders? I avoid spoilers so I don’t know if Tina is staying or leaving. However, if I were her, I’d have my bags packed and be out of Weatherfield so fast that even racing Windasses wouldn’t be able to catch up with me.

We use cookies on our website to give you the most relevant experience by remembering your preferences and repeat visits. By clicking “Accept”, you consent to the use of ALL the cookies.
Do not sell my personal information.
Cookie SettingsAccept
Manage consent